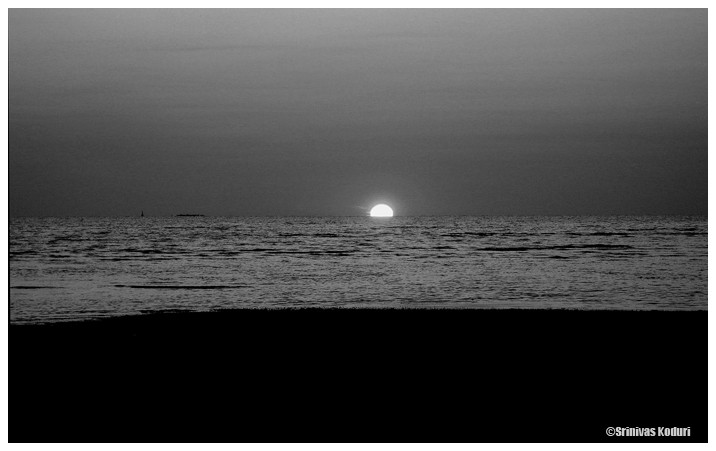 Previous Next
← previous day next day →

Its Over and Out

I forgot to mention about the camera that i used since the last 3 posts(including this), it is my friend's camera. I left mine in the car. He asked me to use this brand new 7MP camera he bought for testing, while playing around.
I planned and started walking in the low tides towards the end of the land to right where the ocean begins, but guess iam little late. I cud'nt avoid the peace of the land in the frame here as i was not able to reach the end, by the time i reached there, the fireball has already said bye bye and gone down into the ocean.
Nevertheless i still like this 3 layered image in b&W though it included a bit of land.
Regarding cropping this image as well as the last one, I had included all the sky i shot but cropped away the lower parts, as time stamp was on(remember its my friend's camera and he wanted that way).

There's something powerful about the bright sun in the middle of the frame, just staring at the viewer.

I like the layered look too - B&W works well for this one.

Did you sip beer after that?

Healthy photographer eh? Maybe you're into more evil things? just kidding :) Anyway, I like how the B&W captured 3 different tones in your shot. If you look at it for a longer time, the middle part seems like the side of a piece of wood which was cut.

This is a great choice for a b&w - I Love th image Srinivas...